CrazyBattle.fun was inspired by popular new game Fortnite. Is a free unblocked online 2d io game with elements from Fortnite.

Battles take place on an island full of explosive barrels. It is better to stay away from them, otherwise you can be exploded to pieces, if an clever player notices you near the barrel - he will shoot it.

Ammunition: a knife, a revolver, a shotgun, a double-barrel, a tommy gun, a machine gun, a grenade launcher, a rocket launcher, a cannon, a sniper rifle and a laser, a bandage, a armor.

You can save yourself by building walls. You will need the wood for the wooden wall, the bricks for the brick wall and the iron for the iron wall. Wood can be made from trees and wooden objects, bricks from brick houses walls and stones, iron from cars and suitable garbage.

In CrazyBattle.fun players can gain achievements during the battle: a butcher, a executioner, a exterminator, a hunter, a killer, a ninja, a veteran, a warrior, a sniper and a legendary. And skins for unblocked achievements. 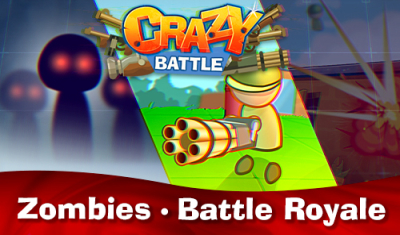