Generals is a 2d based environment strategy game that focuses on the classic simplistic traits of an io game whilst maintaining the competitive nature of a strategy game.

Generals.io is a super cool, simple, yet addicting strategy game where you battle with other players to gain the territory and defend your base. Each game has eight players although it is every man for himself, trust no one as you advance after all there can only be one number one and that’s you! Make sure you thoroughly protect your castle by upgrading the surrounding blocks and making it harder for oncoming attacks to get to your castle. Remember that as well as defence you’re going to need to prepare troops for a counter attack, sitting still like a turtle and waiting for oncoming attacks is far from the best strategy!

To claim, upgrade and build upon blocks you simply need to click the square you’re interested in and select the option of what you want to do.

You can also use WASD or Arrow Keys to move around. 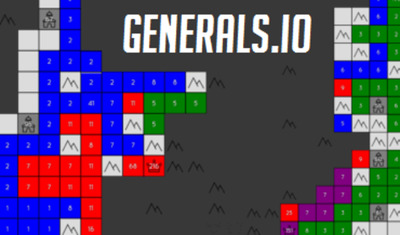