Take to the battlefield with a large selection of powerful units which level up and upgrade based on the number of kills you get. Futuristic hover tanks, bombers, and fighter jets. Start as a basic unit like the Javelin (artillery) or the Manta (air fighter). Increase your kill count to unlock more advanced units like the Harpy and Gladiator. Get even more kills to unlock the super units like the enormous flying battleship and the Ion Cannon!

Each team starts with a finite number of supply. When you kill an enemy unit, a new enemy unit spawns in its place and the supply ticker for the enemy team goes down. Once the supply reaches 0, all bases defenses explode and the Command Center is vulnerable. Work as a team to destroy the enemy Command Center before the enemy destroys yours!

Most units use WASD movement. Aircraft that don't hover, like the Peregrine and bomber, move where you point the cursor. Some units, like the Gladiator, have alternate guns which fire with right-click, but most units just have primary weapons which fire with left-click. Almost all units have at least one ability which is hotkeyed to the number keys. Zoom with the mouse wheel.

Try to stay alive as long as possible so you can level up. Switch to more powerful units when you've reached a high enough kill count. Be wary of your Command Center's health by looking at the bars in the top middle of the screen. If your team's supply becomes depleted, get back to your Command Center to defend it! 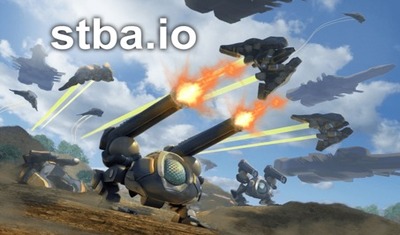